Results from a recent survey (Adoption UK, published November 2017) suggest that adopted children are 20 TIMES more likely to be permanently excluded than their peers. 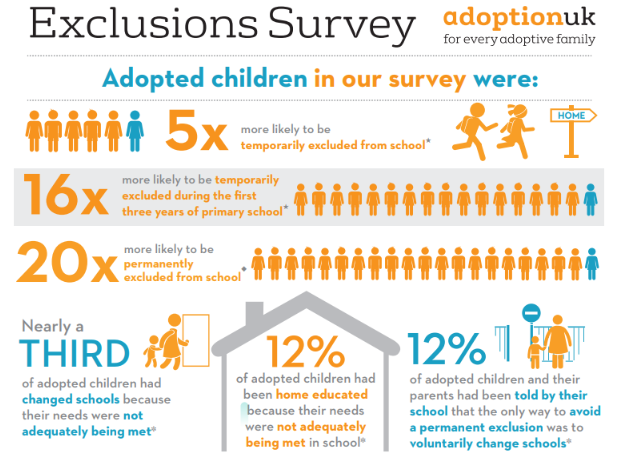 These figures are clearly a huge cause for concern. But what is going on for many of these children at school that’s leading schools to exclude them?

The crux of the issue is that many of these children (and many more –  not exclusively those who’ve been adopted, but those who’ve experienced adverse early experiences or had development ‘disrupted’ in some way) do not relate to the world in typical ways and they spend their day trying to ‘survive’, rather than thrive in our present day education system. Their behaviours can be mystifying to those around them, and traditional disciplinary approaches which rely on rewards and sanctions (and form the basis of many a behaviour policy) simply do not work as they might with other children. They need something different.

In order to learn, children need to be able to engage the higher parts of their brain (accessing their logical, rational and emotional parts), but those who have experienced early neglect and/or repetitive trauma spend much time living in the primitive, survival part of their brain – of course this has played a key role in keeping them safe through tough times, but as a result they can become over-reliant on it. While outwardly they may appear the same as many of their peers, the intensity, duration and frequency of particular behaviours can signal difficulties; behaviours can also often be superficial, masking what’s really going on for them.

Relationships are absolutely critical to improving learning outcomes for these children, and above all to help them feel safe. If a child does not feel safe, they will not be able to learn. Their social-emotional needs absolutely have to be a priority.