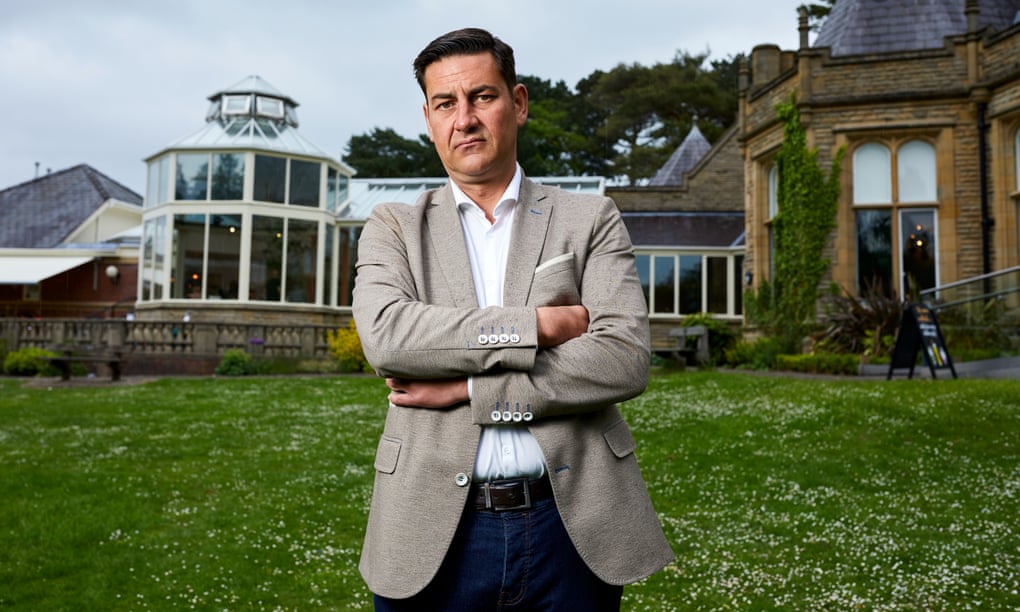 My abuser said he was a scout for a professional club. I played for a team that he ran by himself, with no assistance from anyone else. He came and watched me play football at school after that, on the premise that he wanted to see how I was doing. And he scouted other boys through that, including some younger boys.’

‘He had his ‘blue eyed boys’ at all different levels of the club. He had his young favourite, then maybe a schoolboy favourite and then a favourite player in the full-time system. I became one of those favourites pretty quickly and he invited me to watch games with him; he would drive me there and treated me to a nice lunch. One day he isolated me in a treatment room when I had a groin injury. It seemed to me almost premeditated: he knew I was injured, he knew the part of my body that was injured, he sent the physio away from the area on some sort of errand, all to get me alone in this room in a state of undress. He seemed to almost glaze over in that moment when he touched me, like he’d become a different person. I knew it was wrong straight away, but I didn’t know what to do.’

‘My parents were fooled. He was so charismatic. He told them I sometimes played better after staying at his house. And my parents were having difficulties in their relationship at the time, so for me it was kind of a way of avoiding the home situation. In hindsight, I think he picked up on those vulnerabilities and he knew how to take chances to see how far he could get with us, especially those of us who were less physically developed; and more submissive.’

‘I was seven or eight when it happened, but I can’t remember how long it went on. It’s weird, I can remember my whole childhood apart from two or three years. It happened in that gap. I think I buried it in a deep, deep place, and it only surfaced after I saw the reports about Jimmy Savile. I never told anyone at the time, even though I wanted to. I felt so much guilt over the years. Like with who was behind, who was the next one in line.’

A few weeks ago I watched the most extraordinary and deeply upsetting documentary series on historic child sexual abuse in football, entitled Football’s Darkest Secret (currently streaming on BBC iPlayer). The documentary focussed on a number of men who told their stories of being abused as children by their football coaches in harrowing detail. As well as the abuse, all of them had experienced decades of being silenced, ignored and lied to by the authorities in regard to the appalling harm they had suffered as children. Finally, there was some justice. But sadly the viewer was left with the knowledge that many abusers had escaped punishment, and many thousands of victims remained invisible and unheard.

The documentary was aired after the Football Association (FA) published findings in March 2021 of an independent review by Clive Sheldon QC into allegations of sexual abuse in football in England during the period 1970 to 2005. The report found that the FA acted too slowly to introduce appropriate child protection measures, and had failed to ensure that safeguarding was taken sufficiently seriously.

‘Each act of abuse is despicable. Not only was the conduct criminal, and deserving of opprobrium and sanction, but it was devastating for the victim. Football was supposed to be a safe environment for young people: a place where they could have fun, develop their talents, make friends and for some to pursue the dream of being a professional player. That was all sullied by the abuse by those who took advantage of their positions and power for personal gratification.’

Sheldon’s report reveals in detail how youth football had provided excellent opportunities for the abuse to occur. Football was an activity which enabled abuser to gain the trust of the abused and provided opportunities for abuse. It was noted that the abusive coaches:

The findings have, I think, a relationship to previous research carried out by the BBC on abuse carried out by teaching professionals, which I share sometimes within my safeguarding awareness training. In 2018, the BBC published an analysis of the National College of Teaching and Leadership (now the Teaching Regulation Agency) judgements on teacher allegations made between April 2013 and March 2018. ‘Inappropriate conduct’ made up more than half of all bans following misconduct hearings, with a third of cases having a sexual element. Where a teacher’s subject was specified in the judgement, the BBC’s research showed it was the physical education teachers who faced the most investigations, with 23 cases, followed by music (22 cases). It was concluded that an element of teaching to ‘performance’ in the sphere of sports (or arts) – exacerbated the risk of grooming for sexual abuse by charismatic adults, and their ability to exploit the victim’s desire to succeed. So the same kind of dynamics that made children especially vulnerable to child sexual abuse in football clubs could be applied to other sports, and in other settings like schools. In my opinion, it is our role as members of the children’s workforce to acknowledge the increased vulnerability of children in sport and to safeguard accordingly – to prevent and reduce the risk of abuse, to be alert to the signs of abuse and to possible disclosures, and to record, report and refer accordingly to protect them.

For more information on the BBC research: https://www.bbc.co.uk/news/uk-england-44643267

What can done to prevent this from happening?

In the report, Sheldon shared that fear that ‘Many of the survivors I have spoken to have expressed a concern that in focusing on these allegations, it may wrongly give the impression that this is something that happened in the past, and is not something that we need to concern ourselves with now.’

Therefore he made a series of recommendations to the FA, some of which they have already implemented. These included:

Another outcome of the report came in the announcement in March 2021 of new laws which will further protect children from abusive adults in sport.  The Police, Crime, Sentencing and Courts Bill aims to make sports coaches (and religious leaders) regarded as people who are by law in a ‘Position of Trust’ with young people under the age of 18 in their care. This means it will be illegal for sports coaches to engage in sexual activity with 16 and 17-year-olds they work with (young people who are above the age for sexual consent but who are still legally children). Previously, abuse of position of trust, a crime punishable by up to 5 years in prison, only applied to professions like teachers, care workers, youth justice workers, social workers and doctors, who were regarded as those roles most likely to regular and direct contact with children. Extending ‘position of trust’ status to sports coaches has come about precisely because we have become so much more aware of how children’s trust can be so easily abused. For more info on this matter: https://learning.nspcc.org.uk/research-resources/briefings/preventing-abuse-positions-of-trust

More resources on safeguarding in sport:

The NSPCC has a large section of its website dedicated to safeguarding in sport, NSPCC Child Protection in Sport Unit (CPSU): https://thecpsu.org.uk/

The CPSU has an extensive Sport Resource Library: https://thecpsu.org.uk/resource-library/?type=1171

Also in April the CPSU published a new animation looking at how sport can safeguard children. Topics covered include: the difference between child protection and safeguarding and how children and young people can be further protected beyond their time at training sessions. Separately, CPSU has also published an article looking at lessons that can be learnt for the sports sector following the publication of the Sheldon Report into the non-recent child sexual abuse allegations in football: ‘how can sport safeguard children?’: https://www.youtube.com/watch?v=0WAoliBvKFQ (2.11 minutes)

Safeguarding in sport doesn’t just mean protecting children from the risk and harm of abuse. In March 2021 the CPSU published a briefing paper looking at the issues arising from bad weather conditions prior to and during an event and the contingency or cancellation plans that should be in place in case the weather is unsuitable. Safeguarding at events – weather considerations  It also updated its content about supporting children to return to sport after lockdown: Supporting your child to return to sport after lockdown