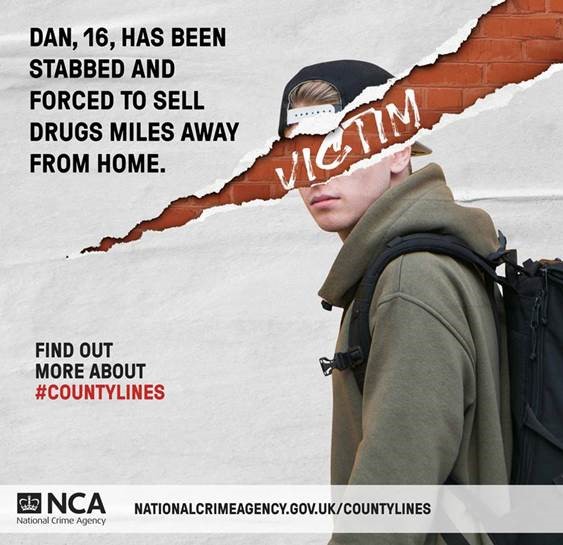 ‘ I can see them out the flat window, see the officers walking around, thinking alright, these lot are looking for something, but they don’t know who I am, cos I’m not from around here. I’m walking around the corner to where the flat is. Outside that flat, there’s two TSG vans, two cars, sniffer dogs, police everywhere, I carried on walking straight down the road, found out where the train station was, went home… These lots were making me deal A class drugs, I don’t like it, but I was a kid, I wanted money, so you have to do what you don’t like … I had a machete the size of my arm. No, I’m serious, that’s what he gave to me, he gave me weapon of choice, no one can touch me.’

I say in my Safeguarding training that understanding abuse has become more challenging over time as our knowledge of the risks that children face expands and we gather more and more complex data of the reality of children’s lives. Years ago, an abused child was generally deemed to be a beaten or neglected child. Gradually our understanding developed to acknowledge sexual and emotional abuse. Now safeguarding policies are expecting to go beyond recognition of the four broad categories of abuse – physical, neglect, sexual and emotional – and recognise diverse welfare concerns within and across those categories. One such concern that has emerged fairly recently is County Lines.

What are County Lines?

County Lines is a term used when drug gangs from big cities expand their operations to smaller towns, often using violence to drive out local dealers and exploiting children and vulnerable people to sell drugs. In most instances, the users or customers will live in a different area to where the dealers and networks are based, so drug runners are needed to transport the drugs and collect payment.

An alternative name is ‘Child Criminal Exploitation’. The dealers will frequently target children and adults – often with mental health or addiction problems – to act as drug runners or move cash so they can stay under the radar of law enforcement. In some cases the dealers will take over a local property, normally belonging to a vulnerable person, and use it to operate their criminal activity from. This is known as cuckooing. People exploited in this way will quite often be exposed to physical, mental and sexual abuse, and in some instances will be trafficked to areas a long way from home as part of the network’s drug dealing business.

Like child sexual exploitation, children often don’t see themselves as victims or realise they have been groomed to get involved in criminality. So it’s important that professionals part to understand county lines and speak out if they have concerns.

The statutory guidance, ‘Keeping Children Safe in Education 2019’ which applies to all registered setting now states that:

How can we know if County Lines drug dealing is happening? Some signs to look out for, included in the guidance are:

Over the past few years, the threat associated with County Lines drug distribution networks has rapidly grown with over 2000 identified drug lines operating across the UK, primarily through dedicated mobile phone lines. The nature of County Lines and Child Criminal Exploitation is a rapidly changing picture of threat, harm and risk. Last year the National Police Chiefs’ Council released figures following a week of law enforcement activity targeting county lines across the UK between 7 and 13 October 2019 which revealed 292 children were safeguarded and 49 deal lines disrupted.

Gangs and those wishing to exploit children and vulnerable adults are continuously adapting their business tactics to increase their chances of going undetected by law enforcement and other agencies. While continued lateness and poor attendance over a number of days were previously strong indicators of possible involvement in County Lines (alongside wearing two layers of clothing), there is now a move towards being missing for shorter periods during a school day. This new trend avoids triggers being hit within school or college, and staff not being alerted as promptly to the missed lessons and absence.

In response, a new initiative called SafeCall has recently been set up. SafeCall provides a national telephone based support service to those in crisis caused by County Lines including young people, families/carers and professionals. Telephone Safecall – 0208 392 5710 between 10.00 – 18.00 hours Monday to Friday. Complete the online referral form here; or Email – safecall@missingpeople.org.uk

The Children’s Society in particular are working to disrupt the activity of criminal gangs and keep young people safer. They work with the police to stop county lines activity and recognise the young people that have been exploited by criminal gangs as victims, not criminals. They have developed resources for parents and professionals if they are worried a young person is involved in county lines:

All the resources about Criminal exploitation and ‘county lines’ can be found here: https://www.childrenssociety.org.uk/what-we-do/our-work/tackling-criminal-exploitation-and-county-lines/county-lines-resources